The Australian Floral Art Association Inc. is a constituted not-for-profit organisation that serves as the parent body for floral art in Australia.

One properly constituted representative body from each state and the Territories of Australia is eligible for membership, provided they agree to abide by the Australian Association constitution and objectives. The following organisations represent their State or Territory:

The Northern Territory (NT)  does not have representation at present.

The Association meets each year. These meetings are hosted by the listed State and Territory organisations. Many decisions affecting the Australian Association are dealt with at these meetings, others by correspondence or electronically.

Each State and Territory is entitled to two delegates and one observer at all official meetings of the Association. While individuals and affiliated club members do not have direct voting rights at AFAA meetings, these may be exercised at “grass roots” level, at member organisation State meetings, when business relating to the AFAA is being developed and determined.

The funds of the Association are used for the promotion of floral art and judging within Australia, and for any international events approved by the Association.

Revenue is derived from affiliation fees from the State and Territory members. Donations from these members, their affiliated clubs, and other persons are the major income sources. Sale of Australian Association badges, souvenirs and the magazine provide some revenue, while sponsorship is also sought for major events.

The Australian Association was an inaugural member of the World Association of Floral Artists (WAFA). Thirty one countries are now members of WAFA.  Australia has been represented in various ways at each WAFA show and seminar held to date. 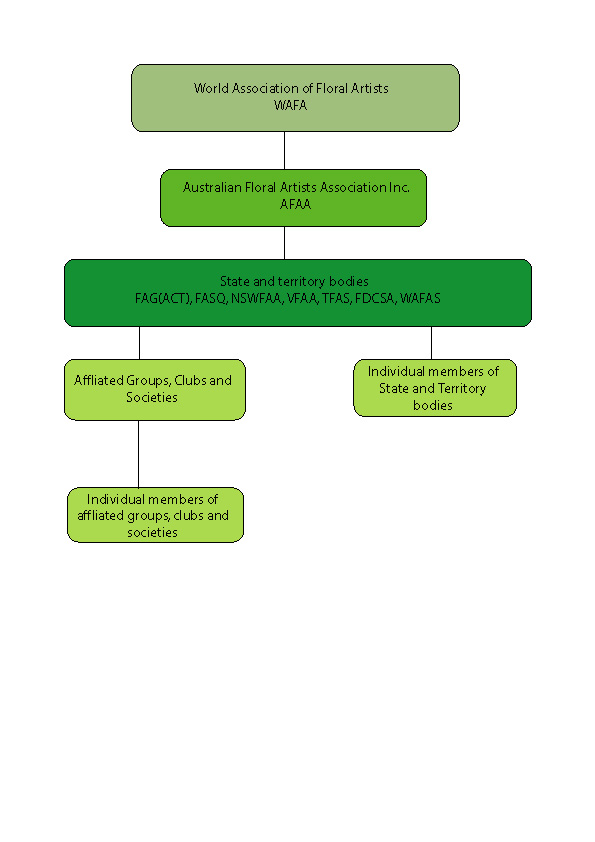