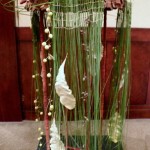 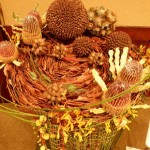 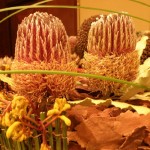 We were delighted to be invited to design and execute the Australian Honorary Exhibit on behalf of the Australian Floral Art Association (AFAA), at the World Association of Flower Arrangers (WAFA) Ireland Seminar ‘A Celtic Journey’ 10th to 13th May 2012.
The WAFA Ireland MC forwarded the following guidelines: (1)Staging to be on supplied metal stands 1220mm high x 330mm square with a 1inch metal mesh on the top, and a magic arm attachment. Space allowed for the exhibit 1 mitre height unlimited.
(2)Honorary Exhibitors were requested to create an exhibit which interpreted an aspect of their Country, and to forward a Statement of Intent of 30 words approximately to illustrate the ideas of the exhibit.
(3)Staging would be in the **Fota Island Hotel** between 7am – 12noon on Friday morning 11th May.
The WAFA MC had made arrangements with a Wholesale Supplier who would supply fresh plant material and have the order delivered at the Hotel.
(4)An information sheet was also supplied outlining the plants, plant products and other objects that should be accompanied with a Phyto Certificate when they come from outside of the EU and should be accompanied by a Plant Passport if they are moved within the EU. Australia was one of the countries identified who would need a Phyto Cert if taking in the listed materials.

Now for the thinking progress as to what to do, with the vast selection of indigenous plant materials available, and the temptation to use as many varieties of banksias, kangaroo paw etc what will be available, what will last if taking plant materials with us. All questions previous floral designers have asked when in this situation, also wanting to show the wealth of our beautiful Australian plant material to the WAFA delegates who would be attending the seminar from around the world.

Finally inspiration for the design came from the coloured and textured bark of the Angophora one of the many Eucalyptus (Gum) trees that shed their bark annually in ribbons flakes or chips, leaving colourful ‘new’ trunks of pale grey, pinks or orange/red tones.
The Angophora bark is quite soft and malleable in texture, with a redish/orange/cream colour. A considerable amount of this was collected, graded, soaked in a PVC glue mix, piled, and then bent and compressed into a curve, to fit with concentric circles, into a 60cm round ply base, which was glued and stapled. This technique took several weeks to compile and then to dry, before being bubble wrapped into a specially formed, heavy duty cardboard box. Various materials were packed around the box including smaller sec spheres, glass vials, extra bark to finish the design, gum nuts and other mechanics that would be required.
To compliment the texture and colour of the bark, a selection of Australian plant material was ordered from the suppliers. Yellow Anigozanthos, Xanthorrhoea, Crespedia Globosa, Eucalyptus cinerea and 15 stems of banksias. To repeat the round base mechanic of the bark and to give volume, round spheres of small gumnuts were constructed. Arrangements were made with Terry(husband) to post a quantity of Banksia ericifolia, Banksia plagiocarpa and the large leaves from Banksia robur to reach the Fota Island Hotel by 10th May.

Contact was made with the Australian and UK Quarantine Authority’s to seek approval and authorization to import the plant materials into UK and Ireland(I would be leaving 3 weeks earlier), which was granted and a print out to this effect was taken with me when going into Manchester UK, and subsequently into Cork, Ireland.
Application to Etihad and Virgin Airlines for an extra baggage allowance was requested, which was granted for 15 extra kilos. Extras like the large sphere, two beautiful branches of fresh Hakea nuts, balls of copper/brown/orange bouncel wool to bind the frame work and various other mechanics needed were carried in personal 23kilo baggage allowance.

During the Thursday pre-set up, the design preparations commenced on binding the frame work (thanks Irene for your help), stems of Xanthorrhoea were bound with paper covered wire using the tatami technique, spheres were covered with sliced banksias and the Crespedia’s were strung together with copper wire.

The overall finished design, using different techniques conveyed a contemporary design, while using plant material indigenous to Australia.
** Delegates stayed at the Fota Island Hotel for the first three nights of their fantastic ‘Celtic Journey’. The 22 Country Exhibits were on display around the large mirrored function room where the Welcome Dinner was attended by delegates and the members of local Floral Art Groups. Next day these exhibits were open for viewing by members of The Association of Irish Floral Artists (AOIFA) and the public as well as the Competition Exhibits ‘Mysterious Nature’ staged in the Fota Island Golf Club. The competition was open to all members of AOIFA and as part of the Seminar programme judged by the International Judges.**

***Unfortunately I (and the exhibit) were not flying directly to Cork, but via Liverpool on a different airline, so a further booking was made from Liverpool to Cork using Ryan Air. Beware if travelling with Ryan Air – although the fares are cheap, they are an unscrupulous airline with no compromises. Paying for your baggage in advance works out allot cheaper, but make sure you are not over by even 1kg at the airport this will incur an extra charge of 20 English pounds a kilo.
Ryan Air cheap fares allow for 10kg on board baggage, but this must include all items such as handbag, camera etc and the baggage must fit into a certain size requirement (which is checked) pre departure at the boarding gate.
Ryan Air does not allow the combining of 2 pieces of baggage, for one weight. Each piece must be checked through separately and paid for individually
If you do not take a printed ticket to the check-in a charge of 40 English pounds will apply, so make sure you take your printer with you!!!!! Or make arrangements to have your ticket printed out, self-service kiosk or ticket desk is available 40 minutes prior to the schedule flight departure. Read the small print on your travel documents.

On this note we would like to thank the Australian Floral Art Association Members for nominating us to design and execute the Australian Exhibit at the WAFA Seminar in Ireland, it was indeed a great honour and learning curve, we thoroughly enjoyed the experience. 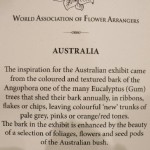 Our Floral Art Friends Around the World